James Hickman and Dan Cassidy arrive in Campbeltown as part of their UK tour. The transatlantic folk duo formed in 2008 and recorded their first album Severn Street the following year. James Hickman’s guitar playing and wonderfully unique vocals work with the harmony singing and virtuosic fiddle playing of Dan Cassidy. As a duo they provide a wonderful mixture of new and old folk music with influences of roots and blues.

As a result of a meeting with Aly Bain in the 1980’s while touring professionally Dan’s interest in Celtic music began. Dan has been a successful session musician and had his own band the Dan Cassidy Swing Quartet. He appears on several recordings of his sister the late Eva Cassidy.

Hickman grew up in Shewsbury and started performing in folk clubs with his dad at the age of thirteen. After music college he travelled with his guitar to Ireland and then Iceland where a meeting with Cassidy resulted in them co-founding The Dan Cassidy Swing Quartet. 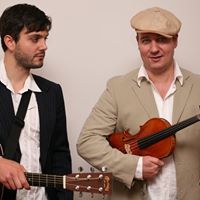 Further info about their early careers can be found http://hickmanandcassidy.co.uk/about.php

Tickets are £10 each and are available at Ardshiel Hotel reception or online at https://www.wegottickets.com/event/470070